As educators, we receive a lot of resources. Sometimes without the necessary guidance on how to use it! Have you received an alphabet arc, but you’re not quite sure what you should do with it? Better yet, have you always had one, but you want to make sure that you are using it to its full potential?

In this post, I’m going to share with you a few easy activities that you can implement in your classroom today! Click play to watch, or read on for more!

Purpose of an Alphabet Arc

Alphabet arcs aren’t necessarily a new concept, but I found that they’ve grown in popularity over the years. I didn’t always understand what the hype was about, but as I’ve learned more, I have come to love them. I use them with my beginning learners a lot. The purpose of an alphabet arc is to help students gain speed, accuracy, and automaticity in letter recognition. But there’s so much more that you can do with it! All you need is a letter arc and some letters!

Getting Started with an Alphabet Arc

I begin with lowercase letters because most of the students coming in do not know those letters and that’s kind of where I begin our intervention. So I keep it simple and students will match capital to capital letters or lowercase letters to the lowercase arc. When students do this, it is just simple visual discrimination, but it’s a good place to start. I have found that even when they start to be able to visually discriminate between the words, they’re unable to tell me the letter name or the sound that it stands for.

Once they’re able to do a pretty good job of matching the letters, we begin to touch each letter as we sing the alphabet song. Most students know this song, and you’ll find that there are a few who do not, but it is great data for you. It gives them a great frame of reference and practice with one-to-one correspondence in naming each letter. Because what I hate the most is that middle part, when they say ELEMENO, instead of L-M-N-O-P, so we spend a lot of time there.

Differentiating with the Alphabet Arc

Let’s say you find that you need to adapt the alphabet arc because all of the letters are overwhelming for your students. So what I do at this point is if there are some letters that we have already taught, like O A D G, I’ll put those letters in the middle so then students will pick one letter, say its name, and then match it to the letter on the arc.

Then next they can also pick a letter, say its sound, and then move it to the correct place on the arc. That way you’re just focusing on a few letters at a time, and then you can work your way up to the whole alphabet when it comes to naming and sounds.

So what if you need to extend the activity from that point? I move to where most of the letters are missing. Their eyes definitely get wide when that happens, but it gives you some great data points and you can find out what their deficits are when it comes to letter naming and letter sounds. When they get more comfortable with that, then we start to match capital letters to the lowercase arc and lowercase letters to the capital arc.

If you’re looking for something different, there’s also an online alphabet arc which you can find here. Students can easily move letters with the click of their mouse, move them to the correct space. You also have the option to change to lowercase letters. You can make the vowels red, just click to apply the changes. You can also reset it whenever you need to.

If you don’t have access to any alphabet arcs, don’t forget to grab your free file below! All you have to do is print them off, glue them in a file folder, add some letters and you are ready to go!

I hope that this post helps you in your alphabet arc journey!

Do you have tons of alphabet picture cards from all of the reading series your district has moved on from? No worries, I’m going to

What is a Sound Wall?

Sound walls have been sweeping across the nation recently, replacing word walls in classrooms all over. Why? This is because sound walls are an important

Setting Up Your Classroom for Writing

Writing instruction can and should begin in kindergarten. Starting a writers’ workshop in kindergarten can be scary if you’re not sure where to begin! Before 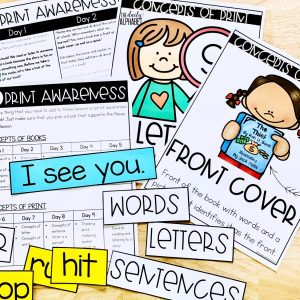